The 174 Movies of Morgan (Ft. Letterboxd and Tableau) 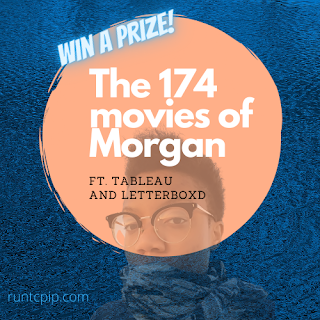 Letterboxd is a personal database to keep track of what movies you've watched, want to watch, and their ratings 🎥

Now, we're looking at my own data. Everything goes from 2016 - 2020, even though some movies are dated for the years they were released. I am keeping the date watched and the year released in the data. I've hidden the Letterboxd URLs to the specific movie pages - It's not necessary - and my own username is not shown.

Spoiler alert: There are movies that are highly acclaimed that...I do not like! Feel free to link to this post and go "How does she like 'Valerian and The City of A Thousand Planets' more than 'Up'?"

Check out the public charts here on Tableau Public, and follow along! 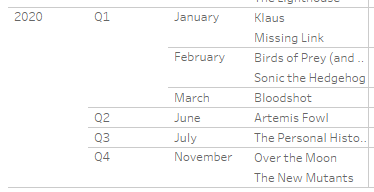 For the curious, July is "The Personal History of David Copperfield". If 2020 had not been 2020, June would have included A24's "The Green Knight", Disney's "Soul", and Universal's "Candyman".

Q2 - April to (and including) June

Q3 - July to (and including)  September

Q4 - is October to December

I notice that does not include rewatches of movies. I know I logged a rewatch that would be in Q1 of 2020.

If you can guess which movie it is (You get one shot at it), post on this LinkedIn post, I'll send you the code to a 5$ gift card to either Starbucks or Dunkin. Your choice! 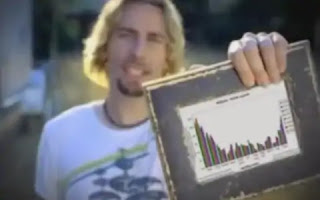 Average Ratings Per Year (The movie came out)

I had to adjust this a bit because the information was spread out over 120 years (The oldest movie was "A Trip To The Moon"), so I adjusted the axis to start at 1960 and go to 2021 for visual clarity. 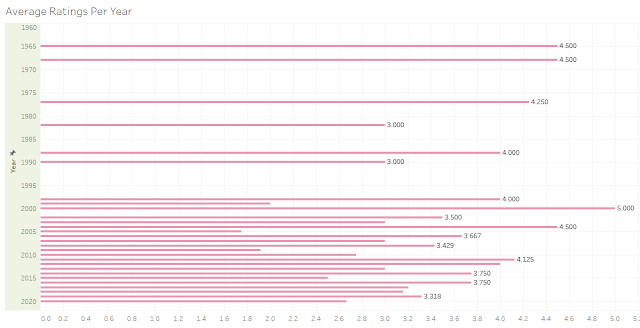 The year that had the movies with the highest ratings were 2000, with 5. However, how many movies from 2000 did I watch?

This is a pro-Wuxia house.

Amount of Movies Watched Per Quarter Over 174 Movies 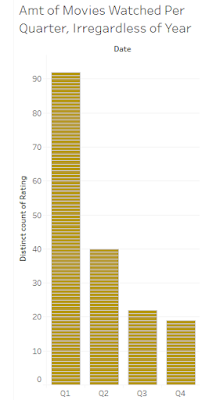 I expect Q4 to rise by 1, with the release of "Soul" on Disney+. If "Raya And The Last Dragon" came out as scheduled on Thanksgiving, it would have been added also.

Don't forget about the competition and the prize 😉 Ends December 20th, 2020. Or until someone gets it.