None of this is promotional. I am not paid by Target to do this. Boy, I wish I were. Someone let them know! 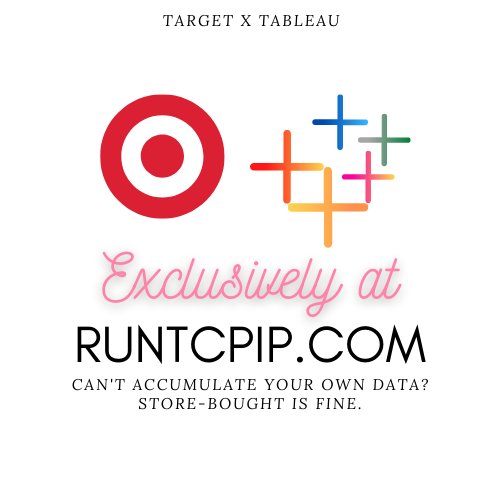 I really love to cook. It's fun to find unrelated ingredients and make something out of them that's mostly palatable.

This idea came to me while driving home from Target. I had bought stuff from Good and Gather, their in-house grocery brand that replaced Market Pantry. With its sleek and minimalist design packaging, it's easy to spot on a busy shelf.

The G&G item is usually less expensive by a few cents. Target's food brands have built enough goodwill with me to take the chance.

Not every item is a winner - some I still prefer a different, more established brand. Some  are so ordinary, there's no point in reviewing it. A baby carrot is a baby carrot, G&G ones come from the same field as Green Giant.

For the chart (See here): I used the information on "Guest Ratings and Reviews" [example]

For 'Repurchase', I used the chart on the far right that says '____% would recommend'.

A cheddar-and-apple salad with walnuts and cranberries is delicious.

Review: It's chewy, and doesn't leave you with the good snapback other cheeses do. It's like biting into something and you're waiting for the feedback, but it doesn't come. Nothing bad, but not my textural preference.

Verdict: I'd rather go with Tillamook for the extra sharp.

Lentils are little flat grains that are good at making you feel full. I usually cook mine in a crock pot for a few hours and eat them in their own liquid, which gains a nice, earthy flavor. It would probably absorb flavors fairly well. Remember to salt that water!

The texture gets mushier the longer you have them cooked and sitting. It's still edible, but my preference is to the 'just barely finished cooking ' side of the equation.

It doesn't taste like much of anything. It's .99 cents, so you could do worse. I wanted to use it in a smoothie to replace a dairy-based option. The taste is minimal.

Verdict: Spring for the Bai Molokai Coconut instead. There's also a pineapple option.

Needs more apple flavor, but cheaper than the other 'artisan' sausage by .30c. There are other flavor varieties.

The closest alternative to Larabars, which are also good - and a bit more expensive.

Verdict: The texture is a lot less distinct than the Larabars, where you can taste individual nut or chocolate pieces, but unless you're allergic to nuts, it won't kill you.

The Analytical Reasoning part - The Graphs (& How I manipulated them)

Find them Here on Tableau Public

I had to filter out the "Blog Post HERE" section of the spreadsheet. 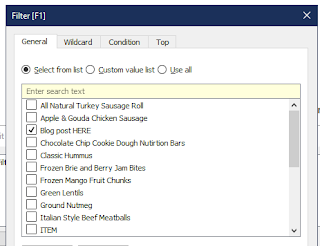 At first, Tableau was not acknowledging my "Taste (1-5)" and "Value (1-5)" labels. On the data source section, you can select "Clean with Data Interpreter" and it figured it out.

Repurchase Likelihood sheet: Tableau sorted the "Repurchase" fields by 'Yes' or 'no'...and the one time I idly put 'Sure' about that cheddar block.

By Item sheet: I had to edit the axis. My scale went only up to 5, this one stopped at 6. 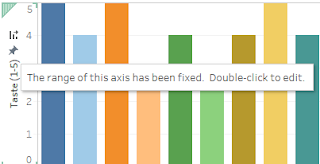 Percentile of Value and Taste Sheet: I removed 'sauces', as there was only one in that department and multiple options in others (besides snacks. I left snacks because that item was more positively received. Ah, data manipulation!)

65% of items were likely to be repurchased. I came to this conclusion by giving items with "50% recommend" or higher a 'yes' mark.

This was very fun to do, and I learned a lot. I should find some more data to play around with.