May 18, 2020
In Packet Tracer, a demo software made by Cisco Systems. It certainly has changed a lot since 2016. It's almost an Olympic feat to even get started with it now, but it does look snazzy. This is for the new CCNA, that integrates, among other things, IoT and Automation, which I've worked on here before.
Instructions here.
I don't know if this is an aspect of "Let's make sure people are paying attention and not simply following blindly", or an oversight - The instructions indicate a Meraki Server, when a regular one is the working option here. 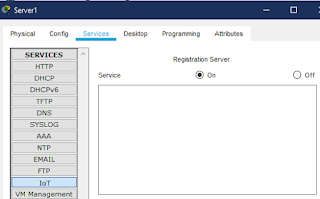 I have to enable the IoT service on this server. Also, we assign the server an IPv4 address from a DHCP pool instead of giving it a static one. For something that handles our IoT business, perhaps that's safer; Getting a new IPv4 address every week or so is a minimal step against an intruder, but it is a step.

There are no devices associated with this new server; In an earlier lab (not shown), I attached them to 'Home Gateway'. Go into the Config tab of any IoT device and connect to the new server; 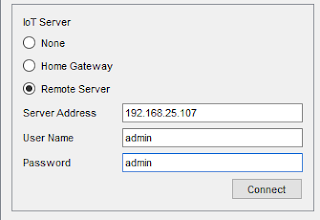 This one is a fan. Fun time to be alive, I get to configure a ceiling fan to work with the internet. 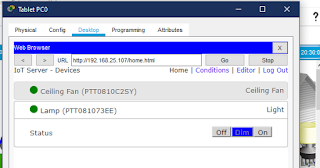