Jira is a piece of project managing software that can be maintained on-prem on a server, or in the cloud (also, technically, on a server).
It's a busy piece of planning software for software development, with various modes (scrum and kanban) depending on your project.

You can learn the essentials remotely, with a 6-hour course - This is more of a brief, technical overview about using a Kanban board in Jira.

Introduction aside, let's get into the completely fake idea of "Installing Wi-Fi At Hogwarts School of Witchcraft and Wizardry", and see how these boards can help keep me on track.

Don't think too deeply about the logistics of magic and technology.


Below is our board at the relative beginning, with some tasks already there. This is using the Classic Software model, which has a lot of functionality and features and a higher level of control that the next-gen boards do not. They are built for simplicity.

It has already been decided, yes, we want Wi-Fi at this school that predates the Middle Ages. We have already installed the hardware necessary to attach the school network to the local ISP.

I wonder what a magical ISP would look like.

We could get very minute with this, but that doesn't encourage productive flow. A task should be more than 30m but less than 3 days. You can limit the amount of issues in a column. 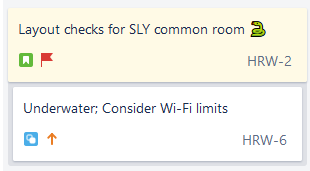 The Slytherin Common Room is under the lake. Wi-Fi has a hard time traveling through water. Until a solution is found, this is considered an Issue subtask. You can see the subtle indentation of the second card. Then, I converted it to a Bug Issue by clicking the navigation subdots on the submenu. 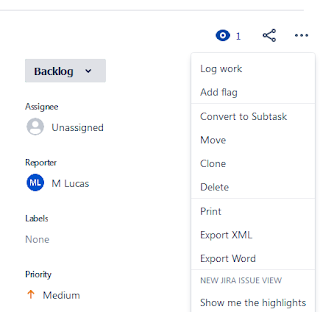 Doing that removes it from being a sub-issue. It's a bug related to a specific aspect of the project, but it can only hold one value. Let's convert it back to a sub-issue. 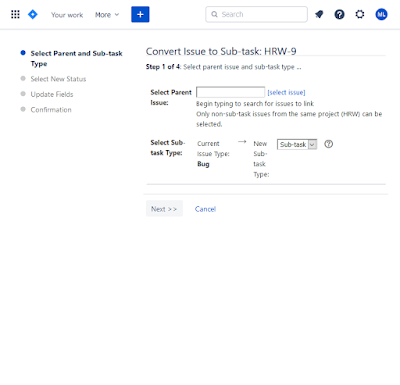 I was wondering "What exactly is the difference between sub-task and issue?". In an 'native English speaker' sort of sense, I understood a sub-task to be a "This has to be done eventually, but it's not a serious problem.", whereas issue may be "This is a non-technical problem that needs to be addressed."
Turns out, they're part of scrum methodology. I thought Jira was simply giving cutesy names to things.
Sub-tasks are "Hey, this needs to be done by Team B, so I'll assign it to them." 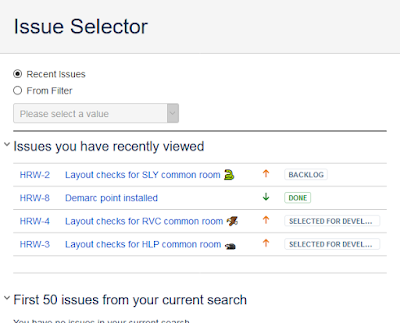 'Consider AP for library on 4th floor' is a sub-task of 'Installation of base APs', which, here, means the larger APs accepting traffic from other APs to send to the demarc point and onto the internet. 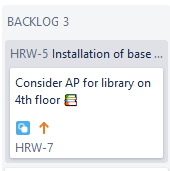 There are in two different states of completion on the - AP can still be installed while deciding about a certain room.

While they decide on that, let's work on installing APs in one of the tower common rooms. How about Ravenclaw?

You click and you drag to the appropriate column. Good times! What information has already been noted about this part of the project? Click the tile and open the side menu. 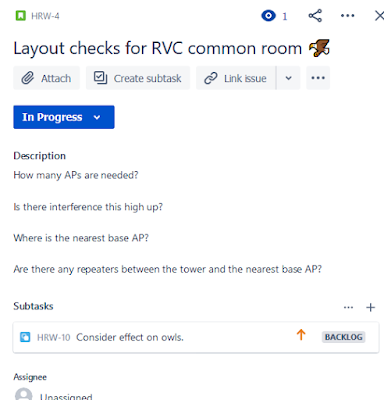 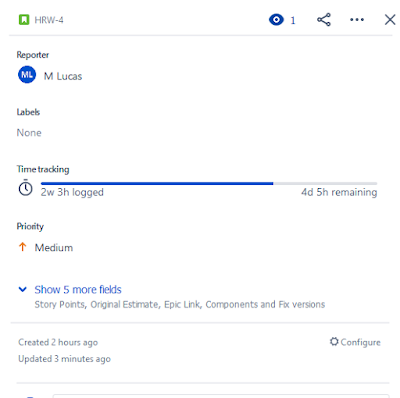 Or, to see everything fairly quickly, scroll to 'Activity' at the bottom and hit 'History'

Speaking of work logs, let's check back in with the backlog. Looks like the Slytherin Wi-Fi issue has been solved. 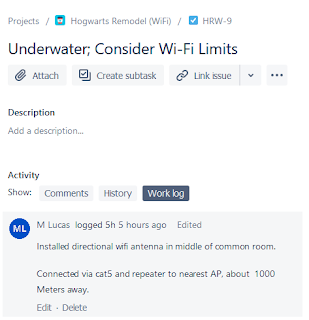 In retrospect, being surrounded by water means less packet-sniffing from passersby, as Wi-Fi signals struggle to swim. This task is marked as Done, and we can move their layout checks to the In Progress column.

We're making headway. Let's check on the library. It's been decided, "No, we don't need Wi-Fi in the library.", which is probably the #1 place to find Wi-Fi everywhere else in the world. I guess if they've gone without it for 2000 years, it's not that vital.

I get the message "You're about to permanently delete this issue, its comments and attachments, and all of its data. If you're not sure, you can resolve or close this issue instead.". I see 'delete' and 'clone', but not 'resolve' (it's usually reserved for bug issues. Thanks Heather Ockenhouse!)

I haven't found the other options mentioned, I'll move it to Done.

Since there is no recorded incident of letter-carrying owls being affected by wireless signals, the APs are installed in Ravenclaw Tower. They will be monitored in the upcoming days for irregularities. If all is well, we can install them in Gryffindor Tower too!

Hufflepuff Common Room is also underground, but closer to the surface and not near water like Slytherins. However, they are near the kitchens, and we know a variety of materials can interfere with signals. Let's see how the first dungeon common room works with wi-fi first.

Clearly, this is all extremely rhetorical. I have barely scratched the surface with Jira's project management boards. I do want to point out things I liked: 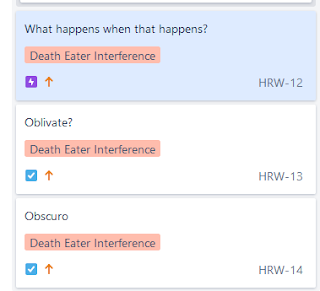 Here's a talk-through demo I gave in a Zoom meeting (Thanks Joanna Udo!)
This is pre-JKR being transphobic. I hope it doesn't stop you from sharing this post! If so, I totally get it.