July 22, 2018
The title was initially 'Bring Back the Node', but I didn't think people would get the reference. Applause if you did!

Making a deployment in the previous post made a POD for our application to be hosted in.

Pods are an abstraction that represent 1 or more containers and shared resources for them, like Volumes, what the page describes as

‘Networking, as a unique cluster IP address’ (Sounds exciting, like a distant relative of subnetting or vlans)


and instructions on  how to actually run the containers.

A Pod can hold the application and something that is closely coupled to it. The example given is a Node.js app and the data to be read by it.

Pods hold containers, and the containers share an IP address / Port space
Are co-located and scheduled, and
Run in a shared context on the same Node.

When we create a Deployment, that Deployment creates Pods with Containers inside of them.

The hierarchy reminds me a bit of Forests/Trees. Or Matryoshka dolls.

Pods run on Nodes, a virtual or physical worker machine in Kubernetes, and is managed by the Master.

Every Node runs at least a Kubelet and a container runtime, that pulls the container image from a registry, unpackets it, and runs it.

I’m just going to link to the image they provide. It looks like a cell.

* Nodes hold pods and pods hold volumes and containerized apps.
* and there are some processes on the node.

The syntax is kubectl [action]

- get [resource]; Lists resources
- describe; Show details about a resource
- logs; Print logs from a container
- exec; Execute a command on a podded container.
And those are what we’re going to be using in today’s tutorial!

Just putting in kubectl get with no specifics lists a lot of things. 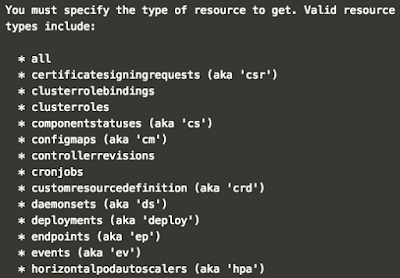 adding pods gives us just the one.

But what’s in our pod? Describe it. 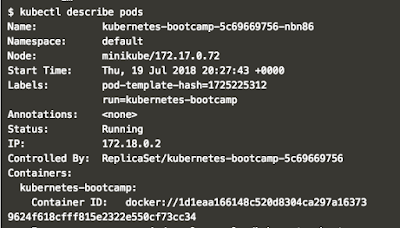 That’s not even all of the information!

Time to debug through a proxy in another terminal window.

We’re going to store this into the POD_NAME variable.

the curl request shows the output
{curl http://localhost:8001/api/vi/namespaces/default/pods/$POD_NAME/proxy}
The very long Pod name is in that variable, we don’t have to type it out, just $POD_NAME. Nice.

If there was more than one Pod, it wouldn't work.

What about our container logs? Let’s use
kubectl logs $POD_NAME

The pod should be up and running, and we use the exec variable instead of get. 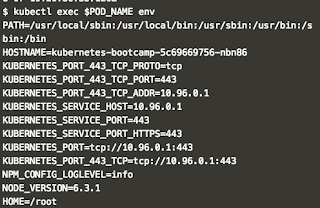 Oh, we’ve moved to the root of our container! See the prompt over there?

Now we can run the application with cat [where the source code is stored].
And check it again with a curl command. Close the container with an exit command.