Hold Everything! It's time for Kubernetes Tutorial 1

First; What is this?

I received some advice that Containers are all the rage. Containers make it possible for software on one system to work reliably upon another by shoving the environment software needs to run in a container.

It's like an ant farm - The ants still work if you move them from the forest to the beach.

We're going to learn Kubernetes, which schedules and distributes containers across clusters.


With a tutorial right on the very website! Always love it when people make it easy to learn their product.

WHAT is a Kubernetes Cluster?
It’s a group of computers intended to work as a single unit.

Abstractions in the software let you send containerized (packaged enviroments) applications to a cluster and not tie them to specific machines.


The cluster has two things.

Master - Coordinates it, ‘it’ being app scheduling and maintaining the right state, updates, and scaling applications.

Nodes - The bits that run the applications.
They (and the end user) talk to the master using the Kubernetes API that the master exposes.

Nodes have something called a KUBELET which talks to the Master and manages the node.

Does the Kubelet talk with the API? Or is it the API?

Deploying apps with Kubernetes tells the Master to start the app containers, and the Master schedule containers to run on the notes

There’s also MINIKUBE that makes a VM on your machine and makes a cluster with only one node.

And we can install it on Mac! So let’s do it!

This is my first time working with Mac terminal, and it looks pretty similar to Linux/Ubuntu, except it’s a bit easier to read. 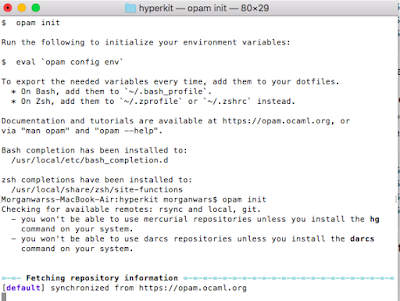 I’m fonder of black on white.

First we install Homebrew and we have version 1.7.0.

There’s an important note;
* opam config env must be evaluated each time prior to building hyperkit so the build will find the ocaml environment.

With the start command, the terminal says ‘Downloading Minikube ISO’. Who knew that was a possibility, eh? Technology is amazing.

It mentions something called kubectl, which will come later, but we can see if it’s installed or not; 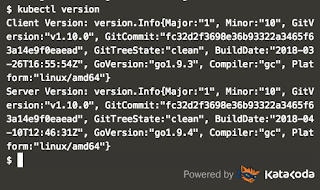 kubectl is the client version and the server version is Kubernetes on the Master.

What’s going on with the cluster?

I don’t think there’s anything, but minikube is ready to roll, and that concludes our first tutorial!