February 21, 2021
Imagine being the largest online money transfer company in the world. You deal with international payments and multiple currencies. You charge a fee in exchange for benefits like one-click transaction, and people are happy to oblige.You were spearheaded to glory by Elon Musk himself.

And a big part of your business is broken.

Feb. 24th - The Issue was fixed for me, though I am hearing reports that it wasn't for everyone. In fact, the error came back for me once again. The work arounds do not work. If the system remains up and operation for a week, I will edit.

It's reported for at least 10 people on Paypal's forums.

Several people on Twitter have also reported the issue. 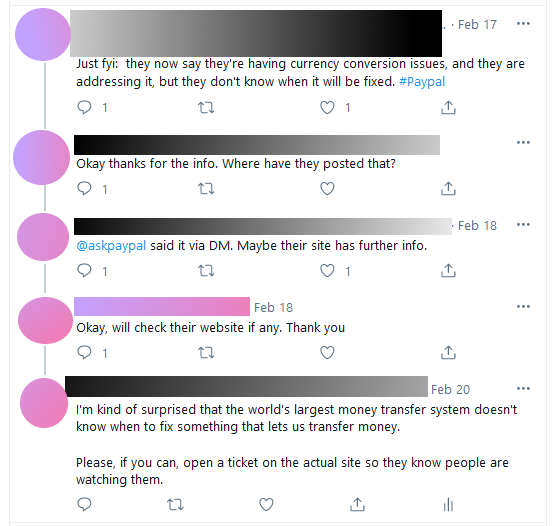 I have an inkling on how software and database changes roll out - But this is your business. Did you update something and this broke? It certainly happens to all of us!

However, what feature is so worthwhile to keep that there's no restore point to make a pretty big part of your service operational once again?

I'm not here to shit on the people working hard to rectify this - Only surprise that there is no official announcement somewhere, just bits and pieces gathered throughout various accounts that they're "aware" of the problem.

While it rose on Tuesday, Paypal stock has been on a steady decline since it was first reported.

Before I could test a supposed workaround, on Feb 24th, it worked. Once. And now it's not working again as of April 19th, 2021. Do I need to have this post open in the editor to be updated every other month?