When the world's .... strangest networking site when down on Feb. 23rd, people were quick with the jokes.

Some of my peers find value in LinkedIn; After 4 years, I see it as a soundboard for everything wrong with the modern workforce, a giant conference for people with no empathy, wearing 16-hour workdays as badges of honor.

Besides their abysmal censoring of black professionals and the rampant bigotry of the userbase, LinkedIn (Owned by Microsoft), have been posting more articles that empower the jobseeker.

And, slowly, people on the site have been changing too - For the better. They're being deprogrammed, learning that their job doesn't really warrant a 40-hour week, that their company could absolutely pay them the same for less hours, that they too can have a happier, more balanced life if they push for it.

But we still had THE JOKES.

Society when LinkedIn is down; pic.twitter.com/VCp2GM4zhK 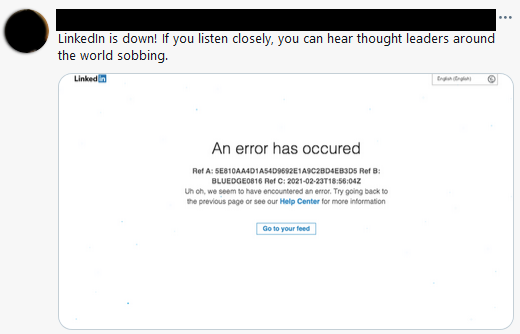 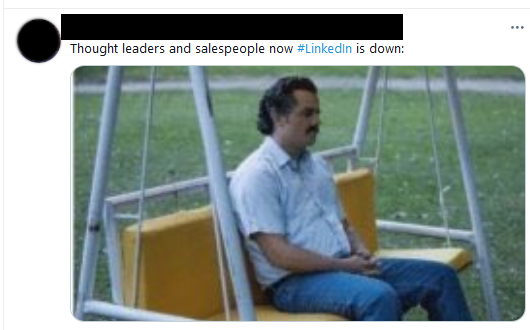 Some tweets reminded us that people use it for jobseeking and genuinely need it. If someone is waiting on a message, I sympathize with them.

I have so many ill feelings toward the site, I'm trying not to let it color this article (so far, so good).

As of about 4 PM on Tuesday, the site was operational again.

Pardon the interruption everyone. We're back on track now. Unconfirmed reports indicate it might have been Agatha all along. 🎶

For 6 hours, it was nice to have a site where people justified broken hiring practices not work.

It reaffirms that a lot of us just don't mesh with people on the thought leader capital of the world. Despite that, I'm glad apparently enough people find value in the site enough to miss it.