July 08, 2020
You think I bought this? Absolutely not. I won it at Cisco Live.*
*"At" being online.
Did I feel like a sellout accepting it? Absolutely. But it's free technology. Do I like it?

Imagine not being tech savvy and trying to set this up! But they just throw it on their main network and call it a day.

Want a bit of security and this is how we're penalized 🙃 https://t.co/vHba0pg6tU

If you haven't been able to tell so far, I'm not fond of it.
Just because it was free doesn't mean I'm not going to be honest.
The surprising bit was making another network- I have an old router I attached to the working one, a completely separate network for the smart speaker to sit upon from other devices.
The network works, but - And this will not shock you - This device is hellbent on listening to every bit of network data that passes by.
- It refuses to connect to segmented networks.
- It refuses to connect to guest networks.
- It really wants to be on my main network, but no.
I'm not Amazon's biggest fan, and this wiretap's insistence on wanting to be on my main network makes me want to pack it up and resell it. There are other reasons to practice good network segmentation - Documentation.
To be fair; The NetGear router I've attached to make a separate network is trying to advertise about 3 different networks;
- Guest [fake name]
- NETGEAR43_5G  (5Ghz)
- 70KCUS-NET [fake name] (2.5Ghz)
I can stop the Guest, but for some reason, the other two keep going, and it might confuse the device.
I found a decommissioned AT&T router I had. The wireless option was disabled, so I went into the settings to turn it out - And it still wouldn't connect!
However, it would connect to my extender. So, provided I simply have nothing else on it, can it sniff my other traffic? Let's see.
SETUP: If you want any kind of security, such as having it on a segmented network, it's a pain in the ass. Well done, Amazon! 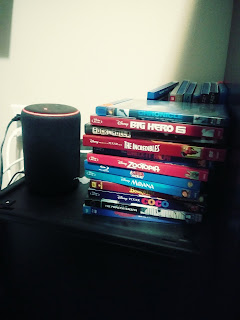 A+ Setup!
I turned the microphone off, and still have simply never spoken around it. It probably would hear it and note my voice anyway, just...not respond. 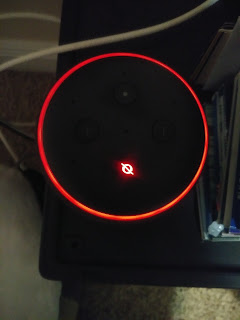 Red Ring of Death.
I chose the Smooth Jazz channel in the music section. I believe it's a sampling, as I don't have whatever Amazon-branded Music Service is out there.
It played some top 40 Smooth Jazz hits of all time. Songbird by Kenny G. A bit of Sade. Legends, yes, however, might I introduce you to ConjureOne and 3rd Force?
For instrumentals, it's nice. Spoken word (podcasts) - Be mindful of where you place it. For a podcast where people have deeper, more resonant voices, it sounded like there was a bit too much bass behind them until I moved it away from a bottle of water. Now it's reasonably clear.
For those with higher-pitched voices, it sounds better no matter where it's placed.
Upbeat music sounds ... awesome! It doesn't encourage the backing track to overpower the song.
It sounds great either way.  But for a bit less money and far less snooping, in 2013, with money from my first job as a mobile phone technician, I bought my father a Bose Bluetooth Speaker for about 90$.
7 Years later, besides a minor instance of crossing frequencies, it still works flawlessly.
THE APP ... is kind of pointless?
I wanted to set an alarm on it, and the options are different. I can have a Hotel Transylvania character yell at me. Finn Shepard can warn me about a Sharknado. There are many calmer options, like Glimmer. Some of these also seem like default iPhone stock alarms.
Alarms and Reminders can be set through the app, but not timers without speaking to the device. Reminders do help, by repeating the text twice with a musical ping.
You can't use the 'Skills' (apps) on the app, you have to speak it. There are exceptions like the pairing with Spotify, but you have to open that app and cast the sound to the device.
VOICE RECOGNITION
It felt odd to not use the main feature. I remembered a workaround - let someone else do the talking for me. That way, Alexa recognizes a voice, I record it, and there is a video to show you!

The speakers on my laptop are on the bottom, so some commands were muffled from sitting on a table with Alexa being about 7 feet away. When I moved it closer, more commands were heard.
I felt so uncomfortable having it, I turned it off and unplugged it on top of muting it. I'm sure there's some kind of black-market firmware software to permanently mute the microphone and cut the connection to Amazon's servers using whatever AWS has to parse human speech.
Even with the option to opt-out of sending recordings for human review; I don't trust Amazon. What's stopping the setting from being ignored?
Overall, the main reason I'm not discounting IoT devices is for one reason:
It helps people. If you can tell Alexa to turn on the floor lights, that's you not bending on your bad knees.  Someone doesn't have to squint at a clock to guess the time.
And if you just think these things are neat, sure! Just be sure to take proper precautions to secure them...if the vendor cooperates.
Retweet?