"Can't reach the internet, and I'm the only one!"

First, I like asking the user to ping google.com - but it's a bit different on Mac, more on that in a bit.

In Windows, we could ipconfig /renew to give up our IP address and get a new one, which might work, or reset the TCP/IP stack to reestablish connectivity.

In the vein of "You don't have to touch that icky terminal! (Unless you're using Python)" spirit of Apple, we can do it via the GUI.

Probably the same on a Mac desktop computer as well!

Back to the ping option, again, Apple wants to keep things shiny and chrome, and that doesn't include the terminal. So, how do you do it?

With a very helpful tool called the Network Utility (Different from the Network option above): 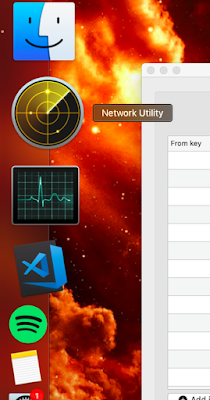 I pinned it to my dock. Always on deck.

It puts the Terminal in a nice, GUI package for you. Easy to Traceroute, ping, and check network status here. 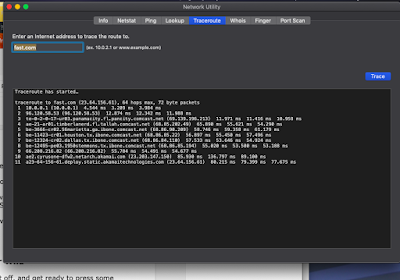 "My Keyboard is Going Rather Wild"

When in doubt, save your work, shut it off, and get ready to press some buttons.

I remember doing this when my keyboard began its slow descent into madness: Reset your PRAM


If that doesn't solve the problem (You may have to do it occasionally, but if it's a twice a day kind of thing...consider the following.) Your machine may have had the thermal paste wear away after years of use, which inflates the battery, which 'phantom presses' keys.

I use Karabiner Elements to disable keys in the BIOS without fiddling too deeply in the BIOS. Of course, in work environments, having a properly working keyboard instead of installing 3rd party software is better.

This probably could solve some other hardware issues as well, like unresponsive USB ports, sound issues, not sure about the webcam.

First: Never hurts to restart the devices that are connected. Earbuds, Bluetooth keyboards - Sometimes a quick refresh is all that's needed.

If that doesn't solve the problem, let's debug it - CTRL+Option+Click the Bluetooth icon:

Hit reset, and then restart your machine. You can even factory reset every Apple device connected. Imagine having the power to just reset everything all at once.

Other potential issues include interference from other devices in the area, and maybe, just maybe, you need to update your equipment.

"The IT Help Desk Technician Says I Need Some Stats...how do I find them?"


You can do a lot of things by holding ALT/OPTION and hitting the icon of interest. Do it with Wi-Fi, and see all the fun information you get.


EMPLOYERS: It's easier to use standard old school utilities with a fancy appearance on Mac than you think. And it can all be easily explained to the end user!