Search and Infiltrate: How to Deeply Investigate a Company's People [6/4/2020] 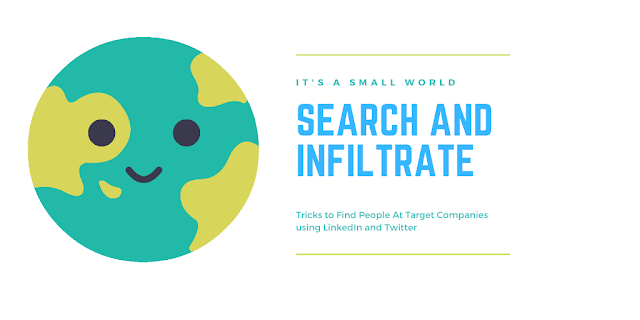 This is a bit of an impromptu post after reading this article.

I had a small thread about this on Twitter, a blog post is a lot better to get the information out in a clear way.

Have you ever used Recruitin.net, came across a group of people who match Your Dream Company, Dream Location, and do your Dream Job on LinkedIn...and they're not active?

What was the POINT, am I right?  A place for professionals to network, but they're not active ...because they have a job to do! You want to be like that!

Unfortunately, in this day and age, unless you have a 'relationship' with someone, they're not going to help you.

I'm not here to talk bad about recruiters - They have a difficult job, I know I couldn't do it! - And even they want a relationship before they place you somewhere, competency be damned.

What do you do instead?

(Note; I'm using my own URL for this and the URLs of clearly famous people, not ordinary strangers to put on the spot)


If you go to a LinkedIn page, oftentimes you will see this in the URL bar;

The name, formatted-like-this-1568b654646 - They haven't changed their URL to something not default. They're probably not active on the platform. It doesn't hurt to check their activity, but chances are they made a profile and left it.

But sometimes, you will see people who have shaved away all those numbers to have a nice, concise URL;

These people are probably active! Hooray! Now scroll down the page - And what if they don't have an 'Activity' Section on their profile? How are you going to engage with them now?

If there is still no activity ("They've been pretty quiet lately"), they're probably not active on LinkedIn.

However! You can search that special URL and possibly find them on other social media sites. I've found some connections on Instagram and Twitter.

(My URL isn't connected to my social media).

Why do you have the same URL for LI that you do for social media sites? Are you trying to constantly be judged by people who hold your livelihood in their hands and are judge, jury, and executioner?

Unless you are spewing bigoted nonsense (or company secrets), an employer should leave your social media alone.

When you find an active person on LinkedIn, Follow them. Or, if you're like me, make a spreadsheet that lists the name, company, date last active, and other social media you find on them.


I have long said that LinkedIn isn't the best place to make connections. As stated above, many people are interested in a 'relationship'.

As you've seen before, most people post once or twice a week - If that. By the time you build enough rapport with them for them to recommend you for a position, you may be homeless or near dead on the street.

And that's before the rigamarole of actually interviewing!

So how can we speed this up? Go to Twitter, if you dare.

Into The Twitter-Verse: Hunting People Via Company on Twitter


Because these accounts are public, I'm not going to be hiding anything.

It doesn't hurt for you to follow them as well!

Click 'Following' - It's right by 'Tweets" and before "Followers".

Chances are, you're going to see a lot of brands, or random people. Often, companies will follow randoms in order to talk with them through DMs.

Make it easy on yourself by searching the company name (Ctrl+F on Windows) on this page. Scroll down to have more accounts load that they follow. Click 'Highlight all'. 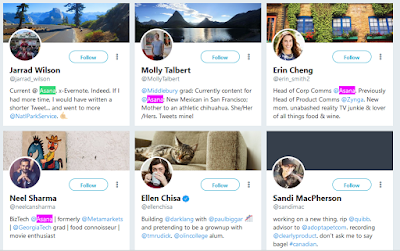 Anyone who is proud of their company will mention it in their description. Click the three dots to the right of 'Follow'. 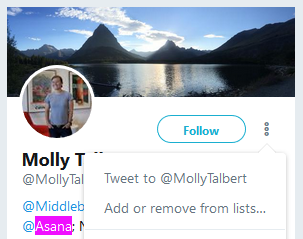 I enjoy putting people into lists on Twitter - I keep the lists private - So I can check once a day, make the necessary likes and retweets.

Twitter is also no indication that people will be active, but it's easier to search for many people at once. And it's easier to bond with people over what they enjoy on Twitter!


Find people who run the company. If they're proud of it, they'll often retweet others who work in the company who might be able to give you a leg into it;  I found about 10 new people from Chuck Robbins' Twitter alone.

I'll stop updating this when I stop finding resources.

So, sometimes, if you use Bing (Yeah, I use Bing - What about it?) and search "person's name [business]", you get this page; See the red areas I marked off.

All of this information and the people made themselves known online. I just scrambled the pictures to be polite.

You get a handy list with pictures, descriptions, and locations of similar people. It doesn't always match the job title and company, but it's a start. Heck, just now, I found someone who has an active Twitter account and a personality that HBO is okay with!

UPDATE: 6/4/2020
New!Twitter has been pushed out to everyone now, rendering the application "Good Twitter" inoperable.
But, unlike New Coke, there are decent perks to this new Twitter layout that make it easy to find people for your business lists.
You can separate retweets by those who left comments, and those who did not. See the short video above.
EMPLOYERS: It's research. You should be flattered that I care enough about your company to have an elaborate spy network.

how to
Labels: how to