How It Works: Star Wars: The Clone Wars

This is a lot more theoretical than I’m used to. I had to watch several episodes to get enough material I was happy with.

(Oh, woe is me, I had to watch a great television program!)

"Looks like you used a macro protocol to wipe them all simultaneously. Impressive."

While this is something made up for the show, I did end up searching macro protocol and coming across this page before the Wookiepedia page.

“Protocol macros enable data to be sent to and received from external devices by simply executing the PMCR(260) instruction in the CPU Unit. “

That’s done via a serial port…but this is for industrial automation - Though many droids in the SWverse are seen as less refined and more industrial, let’s pretend that the serial port is through the long part of the face of a B1 Battle Droid. 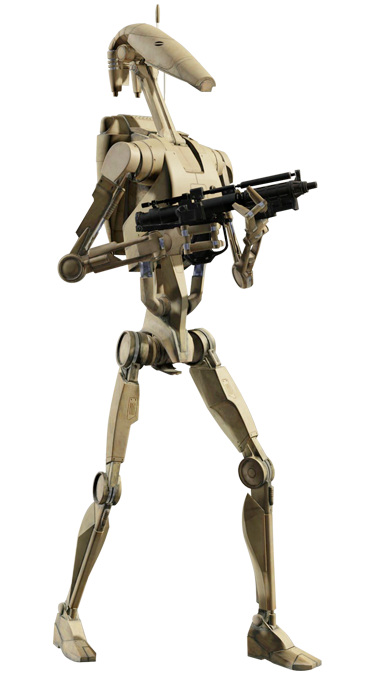 Since  CPUs performance basic control, arithmetic, logical, and input/output (I/O),  it might be plausible in this world of space-magic.


“I’m going to try and override the controls”

You hear that a lot in science fiction, don’t you?

Here, mind-controlled clones (clones created to serve the Republic and Jedi) have been mind-controlled and have taken over the bridge of a ship, blocking access to the cockpit.

Barriss (A Padawan; Jedi student) tries to use presumably the permissions she has on an account to remove the shields stopping her and Ahsoka (Another Jedi student) from progressing to the bridge.

The interface? About 7 large, square buttons and a screen. Maybe there’s biometric security authentication at some point.

By the way; This is one of my favorite episodes of the show.

“We’re unable to reach him.”
“It could be a solar storm. Or they’re rebooting their communications systems.”

Before it was a show, it was a movie. This was my first time watching it, and Palpatine has asked Mace Windu to contact Anakin and Obi-Wan, but the nearest space cruiser to the planet Christophsis can’t contact the pair, and so they send a small craft with a messenger.

Quite a lot of things can interfere with communications, even if they’re wireless; Microwave waves, frequency bleed, malicious interference by a third party, materials in buildings, and especially the gaping void of space.

I mean, I can only imagine that last bit.

Turns out the Jedi also couldn’t send messages from the planet. So my guess is malicious interference so far.

Does nobody in a galaxy far, far away know about bottom-up troubleshooting? Ping or Traceroute?

The messenger - Ahsoka’s first appearance! - Says that they could try relaying a message through the signal on the craft.

Let’s assume everyone above tried that already and that it would take a closer distance far from prying eyes to convey the messages, probably far overhead, near the atmosphere.

And it would appear that does it; The craft is near the cruiser in space, relaying a message from the three on the ground via hologram.

Malevolent forces were prepared to interfere with communication from a large ship, not a small one. Score one!

Check out some more information about GPS interference;
https://www.gps.gov/spectrum/

“It’s no use, their comlinks are on a different scramble set.”

My first instinct was to say “Frequencies are different”.

That still might be a possibility, and I realized; Comlinks are sometimes used at extreme distances.

See the “Brain Invaders” entry above; Once Ahsoka actually had to get to a hologram projector to contact Anakin, who was on another ship.

Sometimes she could use her comlink when one was on a planet and another on a ship.

Other times, an actual hologram could appear, but that may simply be functionality not used often.

So this may simply be a case of playing fast and loose with space technology.

Or; Frequencies are different.


“……The vault will go into immediate shutdown. No one will get in or out. This will give you very little time before the emergency generator cycles and takes over.”
“You’ll use this [a very small device, presumably to copy or hold files] to find and download the exact files from the main frame.” This is one of the most secure banks in the galaxy, but it was designed to keep people out."

First, this is a very secure bank. Make sure no outsider USB ports or drives can attach to your planets-wide banking infrastructure. In a world where you can fly spaceships, assume someone getting around your security system to steal files is exactly what they want to do and plan accordingly.

Bonus: I watch these with the audio captions on Netflix, and sometimes the commentator gets really excited. I had a good laugh at “They head STRAIGHT FOR A CLIFF…THEY FLY OVER THE EDGE….and land on the shuttle.”