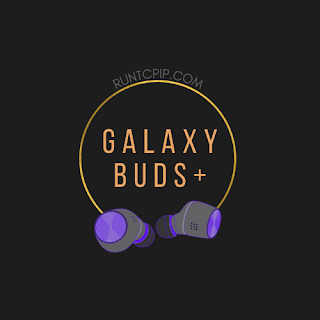 Earbuds have become a hot commodity. It's awesome to have them act independently of each other while still playing music. The Galaxy Buds+ is a wireless earbud that has made its name by combining features of some of the top competitors in the market at a lower price-point - To mixed results.

Before I got to buying Buds, let's walk down my history of audio devices.

The Personal History of Morgan's Audio

While I enjoy my Soundpeats Wired-But-Also-Technically-Wireless Earphones, I wanted earbuds for 2 reasons:

That's a mistake you only make once.

Sennheiser Momentum On-Ears - After about a year, one ear cup began to die, and Sennheiser sent me a refurbished set. They still work, but the over ear puts pressure on your ears, which isn't fun after hours of use. I use them on occasion. There's a muffled quality on the vocals unless you turn on Windows Sonic for Headphones.

I also had some great O'Neill wired earbuds from 2010 that were fabulous. Clear, crisp audio, incredible longevity. Unfortunately, they are missing, and have been for years.

Why didn't I pick earbuds of any of the above brands?

I didn't think to see if they had any.

Marketing did a hell of a job when the choices just came down to 'Galaxy Buds' or 'Airpods'. I kind of wanted the Galaxy Beans - especially Mystic Bronze - but they seemed too big.

The colorful Buds were going quickly; Everyone was snagging them! "I'm not here to be like everyone else.", I say, as I buy my mass-produced product.

I've had these in-hand since December 2020. I've had plenty of time to like - and dislike - this product. Onward!

How it connects to devices

After the initial pairing, it's a simple matter of turning on my Bluetooth on any device and putting the Buds in. A gentle chime lets me know they're connected.  The Buds automatically turn on upon removal from the case - No fiddling around with buttons.

At what distance will the sound stop?

The corded headphones are excluded from this narrative.

I placed my laptop on our kitchen table, made sure the microwave hadn't been in use for a few minutes, and connected the Soundpeats, which began to disconnect about 45 ft. away

Outside, I could only go a couple of feet before things began to crackle and disconnect. I was using my phone as the media source this time. I went back inside and tested the same distance as above, with no issues.

It was much the same with the Galaxy Buds+; The only difference is that they held the connection much better to my phone outside.

They've got they look

Look at the Buds; You'll see a little protrusion (Sticky-out bit) on the one marked 'R', near the bottom: That part goes within the inner ear flap to give a mostly-soundproof seal. Also to prevent it slipping out of your ears. 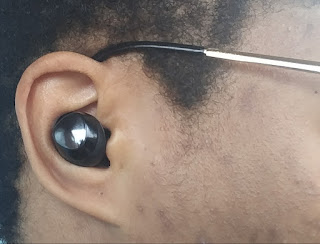 I'm running out of subtitles to obvious things

On Windows 10, there are two different options -

The RealTek are the built-in speakers. The ones that kept stopping because the sound driver would crash. How? Click the link and read on.

The Hands-Free AG Audio is the equivalent of listening through a face shield.

Stereo has very clear quality - Here's how I tested it:

There are touch controls on each Bud:

I could customize it with the Galaxy Buds+ app,but I enjoy tactile controls of click, pause, and play, so that's not a priority for me.

Can it acknowledge slide touches? I'd configure it to go forward or back by sliding left or right. Volume could increase by sliding from down to up.

When I went to the gym (Masked), I put them in and found a problem exacerbated; They have a tendency to drop out for milliseconds. It sounds as if the audio is jumping from one Bud to the other before evening out again - Then it repeats.

The issue cleared up later - I could have been in a crowd of people using Bluetooth, and our connections were interfering.

Sometimes it happens on my walks outside. Probably from having my keys in the path between my phone and the Buds.

Metal does interfere with Bluetooth connections but this has never happened with the Soundpeats.

Interference is such an issue, the Samsung Autochat bot says to be careful; 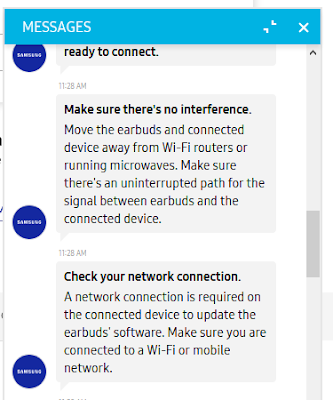 So hard, it may as well be a trial of Hercules

With my Marley corded headphones, I can adjust the volume of programs individually. I can turn down background music from YouTube while being in a Zoom meeting. Buds do not seem to have this option.

Zoom defaults to my built-in microphone on my laptop instead of the microphone on the Buds, defeating the point of having the Buds. In Zoom, If I change to the Buds option, I can't hear audio - anywhere.

I ever turn to Galaxy Buds Headset for microphone, it will not respond, and I cannot change to any other microphone. I wanted these for the ability to use the headphone for clear audio in webcalls.

By the way; This is a known issue. It's not just Zoom. It's also Google Meet and Kaltura.

Being on Zoom only tolerates the 'Stereo' option above - AKA; The dull, muffled quality one.

Not working out of the box with the most prolific teleconferencing software in the world is something that should not have been overlooked.

After a bit of Binging, I came across this Reddit post. Through trial and error, one brave soul has told us how to use the microphone with Zoom.

It works (Barely - my voice does not come in strong), but there's improvement.

Luckily, my voice is clear on calls through the phone, and the other caller could not hear the background noise around me. The microphone works well - In the rare instance its compatible.

In an attempt to troubleshoot the connectivity issues, I downloaded the compatible apps - Yes, 2 of them. It also needs calendar permissions for some unknown reason.

The ambience remover is an interesting idea. It feels echo-y inside my ears. I can hear people talking from about 6 feet away. I can also hear the clacking of my keyboard as I write this. I won't keep this option on all the time.

There are some gorgeous black and purple Amazon exclusive BTS versions. If Blackpink had made some, I'd be interested.

I do like using only one Bud sometimes, and the touch-controls are handy when you get accustomed to them.

With Zoom incompatibility right out of the box, random audio drop-outs, and the assortment of permissions it needs, I wish I had gone with Airpods. I can deal with the Apple Ecosystem because their stuff works (mostly) properly, without a bevvy of configurations and the ability of being able to work with commercial software.

If there are any other workarounds, missed settings, I am more than willing to try them and amend this post.

Besides that sizeable issue, they do sound well, don't hurt my ears, and are a fair option when you know what you're getting into.