June 10, 2020
Back in times of old, when we could go places, one of those places was the movie theater. The smelly, cramped, outdated movie theater.
One of those movies to be played in the theater was Disney's "Artemis Fowl". When worldwide hell broke loose, it was banished to Disney+.
I have waited too long to see it - More than 15 years - And won't be deterred by watching it upon a smaller screen.
Before we can get to that story, let's peel away the application layer tech and take a look under the hood.

I think ,even before COVID-19, that this was headed to a digital grave.

The Front End and The Back End.

I also feel that the load time on Disney+ is slower than that of the Netflix home page, simply because they were determined to shove so many thumbnails onto every page with loading individual elements.
Attempt 1: Admittedly Slow Internet at the time. It's evening, so more people are on. Then again, we are in a residential neighborhood with lots of people with children and people are maybe working from home.
Attempt 2: Faster Internet.
They have to load at least 2 elements per banner and thumbnail (The logo and the background). Would flattening these things in Photoshop degrade the quality of the image? Why not do that and have the complete, single image hosted on the servers to push when necessary?
On a whim, I checked the actions in the Performance tab (For Firefox users, hit the three horizontal lines on the upper right of the navigation bar, then 'Web Developer', then 'Performance'. Or hit Shift+F5.)

This is very helpful for web developers. Here's the documentation by Mozilla. Here is the main page in Waterfall style, which spells out exactly how the JavaScript is loading the page; 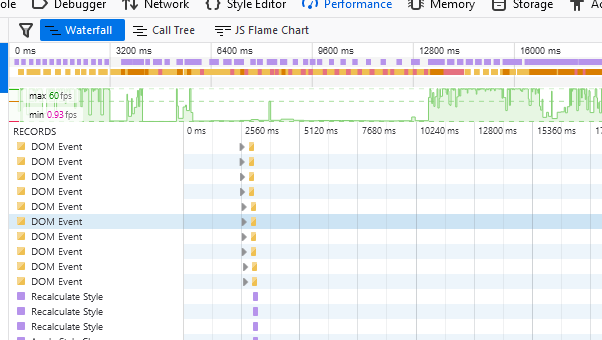 What's a DOM Event? Click here.
The Content
I only intend to keep this for a week, so why change my name? However, I did want to make sure they gave me my favorite Disney character as an icon: 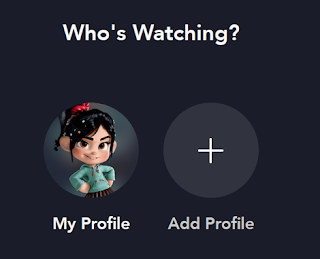 🎉 Now, if they'd only make some merchandise of her, then we'd really be popping.
I thought "Okay, let's find Ralph Breaks the Internet without searching for it, to see how user-friendly, organized, and easy it is to browse."
I flat out thought they neglected to put it on the service. Even when I realized my mistake (the sequel starts with R and not W like the first movie), it's not in the alphabetized list. I had to search for it.
Surprise! It's technically not on here.

Define 'soon'.
It was put onto other platforms before D+ was announced, it has to run through original agreements elsewhere - Probably Netflix - before Disney themselves gets it.*
That's reasonable to have it hidden, then. They also don't have "Tarzan", which is my favorite Disney movie. At least that's coming later in June!
Going back to the video, you'll notice I point out "Star vs. The Forces of Evil"** is on the service. Normally, in most search agents, one can search part of a name and it shows up everything with the name.
You get a lot of "Star Wars" stuff on here, and it's all shown, including some Disney Channel Original Movies (DCOMs). Actually typing "Star vs" gets me the show.
All four seasons are there - And they don't seem to be High Definition.
There are rips that are in super high def. There's no option to change the quality while watching the show. Sure it would have to buffer again, but it already takes a few seconds. I think you may have to be on mobile and then download them in HD - No outright streaming.
Actually streaming something:
There was not a lot of buffering, maybe twice in a 90-minute movie., which was impressive, considering I was also running a Virtual Machine at points. It was SD quality. It took about a minute to fill the buffer in the performance tab.
The movie itself? Well...
Some of the originals are fine - "Be Our Chef" was mildly amusing. The killer bit of programming came and went with "The Mandalorian" and "The Clone Wars".
Overall, Disney+ is not something I can see myself keeping. I don't mind animated shows, but this skews to very young children and families with not a lot to keep me personally engaged in the long term.
But hey, 🎉 We finally got "Artemis Fowl"!🎉
You can always share this Tweet
*It's also why - In a funny bit of naming - There's a sub-category under Marvel called 'Spider-verse'. While the Spider-verse is an actual thing in comics outside of the 2018 hit film co-produced by Sony, nothing from the screenshots of the shows suggests they're showing those aspects, but I do not know enough about the lore to be sure.
** Many disliked seasons 3 and 4. I thought they had their charms.