How I Earned My CCNA

April 09, 2019
I get this question a lot, from LinkedIn to even Instagram and Tumblr, and thought I'd give a list of resources I used to pass both tests on my first try. 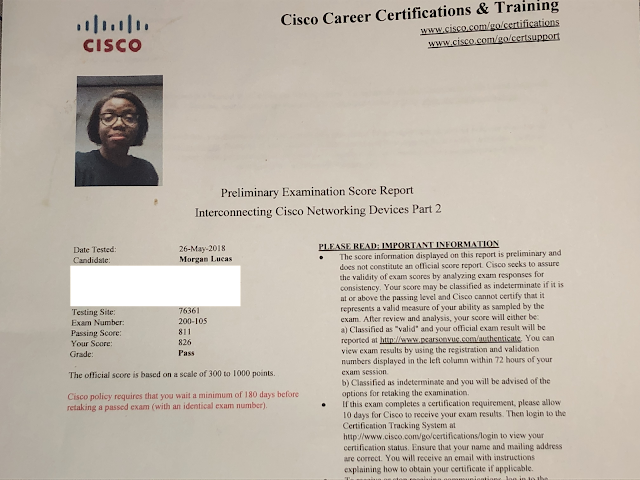 
This is probably the hardest thing to come by if you're an individual technician;  Cisco's Net Academy.

I had enrollment through my college program; It is 4 seperate sections (2 for CCENT and 2 for CCNA). We did each section over a semester. I found it rather crammed in and overwhelming. It was much easier for me to take it at my own pace after I had graduated. I still have access to nearly everything in my courses except the tests.

It has activities to emulate in Packet Tracer - Cisco's virtual network mockup. Use that too! Files are easy to find online.

That also came with hands-on practice with physical equipment, because I was in a classroom.

I read Lammle and Odom


Lammle's book is especially helpful for those who know next to nothing about networking concepts. Odom's is more technical with plenty of stuff that doesn't appear on either exam.

By all means, don't pay 800$ through CiscoPress for one of these books! Go to Amazon, or Chegg. There are also other books (Whose names escape me right now) that you can read on the publisher's website if you make an account.

I did have the Pearson tests that came with the CCENT Lammle book, but I found a lot of incorrect answers. Speaking of quizzes...


"But, Morgan," You're saying, "How can you be sure that they're correct?"

You can't.
That's why I did these last.
If I knew the material, I could go "Well that's not correct." If I didn't know, that's what taking notes on what you're not sure about and looking it up / taking another quiz is all about.

Skillsoft had a fabulous CCNA course, with videos and challenging quizzes. You do need to sign up for a 2-week free trial. It also had a library of textbooks to read as well!

I had a basic Understanding of Computing and Networking concepts


I went to trade school in high school for Networking. It was my major in college.


As unpleasant as Reddit generally is, r/ccna is full of nice people who will be happy to help.


Heck, ask your network on LinkedIn - Be sure to tag it with #CCNA and #Networking. You're adding value by...valuing their opinion.

You can also go to Cisco's own chatboards for insight.

With the exception of Pluralsight (I received a free "team" code from someone on Reddit - See, they're nice sometimes), all of the gentlemen above have mostly free videos.