Carry On My WPA PSK 2 Son


Today's issue, from my very own LinkedIn page;

My Macbook won't connect to certain hotspots - Today, it's my mobile hotspot - with WPA PSK or WPA PSK 2 security settings.

WPA/WPA2 are from the year 2003. It's been around a while and has some issues. My Macbook is from the year 2013.  My initial thought as simply that my machine was too old and incompatible with the newer standard - This has happened before years ago, with the same security settings. 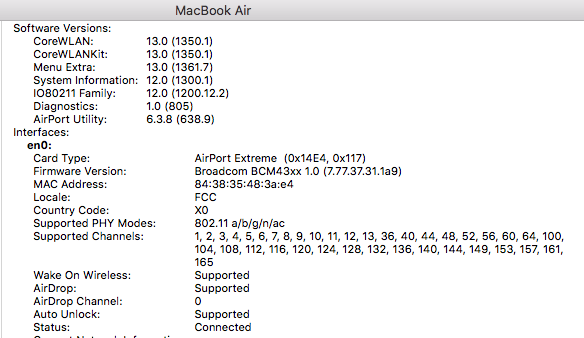 The following is part of my normal network; As you can see, I have security in place that I usually can connect to easily. The reason there's no Transmit Rate is because we still don't have internet restored.

This is my Hotspot;

I'm not familiar with WiFi country codes, but "X0" isn't pulling up anything when I search it.

And here are the settings on my phone;


This article says that since the WPA2 PSK key doesn't mention TKIP or AES, it's probably AES.

Here's someone with the same "issue" (It's not really an issue, I can use the internet, after all). Responses say that it's a router issue. Perhaps it's because my phone's primary function isn't a router, and X0 is a stand in code.

Back to the LinkedIn page, Steven gave some possible resolutions, so let's see what we can do.

Can you believe, that when I tried it again today, it .... worked?